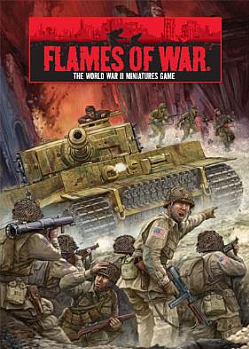 Flames of War is a New Zealand-based miniature wargame set in World War II. Using 15mm soldiers (roughly 1:100 scale) and vehicles, the game represents a company-sized angle of battle. Created by New Zealand-based Battlefront Miniatures, it is currently in its fourth edition.