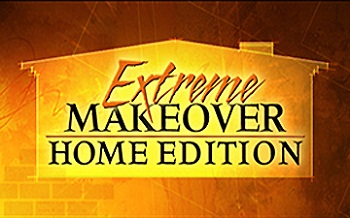 ABC Reality Show where a group of people build (or rather get other people to build for them) a Big Fancy House for the poor, downtrodden family of the week. Frequently features former Trading Spaces carpenter Ty Pennington; later seasons frequently include various celebrities in the design teams.

The story behind this one: ABC had a series called Extreme Makeover which was about improving people's looks through plastic surgery. Someone decided to make a spinoff — technically, what this show is supposed to be doing is like plastic surgery, only to houses. As it happens, while drastically making over a person is a little challenging even among the mainstream note (that show, along with fellow plastic-surgery-glorifying reality show The Swan on FOX, attracted considerable controversy for promoting unrealistic body image goals and normalizing using plastic surgery as a way to solve personal problems), drastically rebuilding a house for deserving people is definitely feel-good programming, besides offering ample opportunities for Product Placement — and the show always tries to make sure that those who are having their houses rebuilt appear deserving. Thus, while the original Extreme Makeover only lasted four seasons, this ran for nine. In December 2011, however, it was announced that the show would end in January 2012 after nine successful seasons. The series has been resurrected for special episodes, including a Christmas Special in December 2012.

During its original nine-season run, the show completed a total of 203 single family homes, as well as two schools, a Wilmington, Delaware duplex, and a Colorado duplex for homeless families. They keep a time limit of a week, but there seems to be no expense spared. (There are willing donors.)

In 2019, HGTV announced that they would be reviving the show, in addition to broadcasting reruns of 100 of the original episodes. The revival premiered on February 16, 2020.

Ty: I guess there's just one more thing to say: Welcome home, [X] family; welcome home!
Everyone cheers
Waldorf: Well, that show was really something!
Statler: Yeah! Not bad for a host with lots of gusto!
Both: Do-ho-ho-ho-hoh!