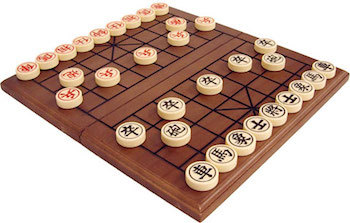 When the game of Chaturanga moved into China, it was merged with another game to produce Xiangqi (literally "the general's chess"), pronounced roughly shiang-chee in Mandarin note Or something like "jeung-kei" in Cantonese, which is the common language of quite a few Chinatowns., and known in English as "Chinese Chess". The disk-shaped piecesnote The checker-like shape of xiangqi pieces leads to people occasionally confusing xiangqi and the very, very different Chinese checkers, which is played with marbles and was invented in the American Midwest in the 19th century and is in fact not Chinese at all. are placed on the vertices rather than in the squares. The board has ten ranks and nine files. Between the fifth and sixth files is a feature called the river. A 3x3 square in the middle back of each player's side is referred to as the palace. note There is also a Western-style board using Staunton-like pieces called the Cambaluc (after an old Mongol name for Beijing). It was only produced by one company and is fairly rare.

Chinese chess uses a different notation from western chess. Each player counts columns from the right and rows from their side, thus the right column for each player is column 1 and column 9 for the opponent. The rows are not marked. Movement is noted by the piece's name's first letter (P, C, R, H, E, A, or G), a number denoting the piece's column, a symbol for the type of movement (+, -, . ) and a number. If 2 pieces of the same type are in the same column, + or - is used to denote the more forward or the less forward pieces respectively. For pieces that move along the lines (ie. the rook), the . symbol is used to show which column the rook moved to and the +/- is used to show how many rows forwards or backwards the piece moved. For example, r1+2 means the rook in column 1 moved forward 2 spaces and r+.5 means the more forwards rook in column 7 moves sideways to column 5. For pieces that do not move along the lines, the same numbering system is used to denote the pieces. + and - are used to show whether the piece moves forwards or backwards and the final number, the column the piece moves to. For example, a horse in its starting position might move h2+3, meaning it moved forwards and into column 3, or h2+4, meaning it moved forwards but into column 4, further left.

Perpetual check is a forfeit, and a player with no legal moves has lost.

Much as you'll see Western chess players congregated around cafes and park tables, nearly any Chinatown will have people gathered in parks and cafes to play xiangqi. note In Boston's Chinatown, one such park has a paved section with a gigantic xiangqi board embedded into the pavement. If you'd like to play for yourself, there's a printable PDF version here

, and a number of computerized versions for all major platforms.