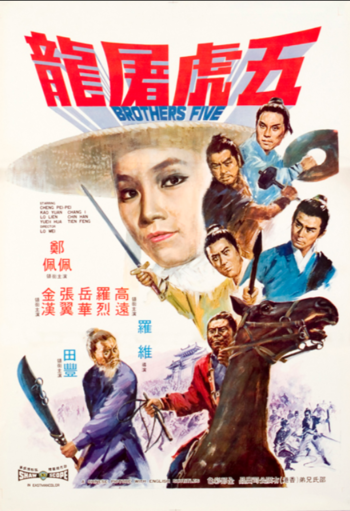 The swordswoman, the valet, the blacksmith, the scholar, the bodyguard and the thief, ready to face Master Lung.
Advertisement:

The ruthless Lord of Teng Long Manor, Master Lung, dominates ancient China with an iron fist. The Kao family, who oppresses Master Lung, ends up being massacred, with the five Kao brothers narrowly surviving the incident, but ends up being separated while they're still babies. Decades later, Yen-lai, (Cheng Pei-Pei) a swordswoman and warrior, must seek the five brothers, now adults and working different careers - Kao Wei the Valet (Yueh Hua), Kao Hao the Blacksmith (Chin Han), Kao Chih the scholar (Chang Yi), Kao Yung the bodyguard (Kao Yuen), and Kao Hsia the thief (Lo Lieh), where she will unite all five of them to avenge their slain family and put an end to Master Lung's dominance.

Containing some of the biggest names in kung fu cinema, at the peak of their popularity, this film boasts an Ensemble Cast, where playing different characters, the entire movie showcases each respective actors taking turns to kick all kinds of ass against hordes and hordes of faceless extras. Imagine a Wuxia version of The Expendables, if you may. This film is pretty much just that.