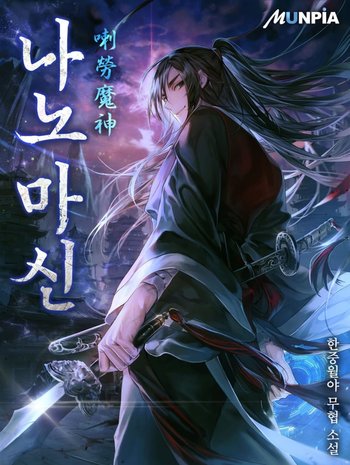 Chun Yeowun, as seen with his White Dragon Blade and Sky Demon Sword
''Master, I am not Mashin (Demon God). I am Nano Machine.’’
Advertisement:

The story follows an illegitimate child of Demonic Cult Lord, Chun Yeowun, who gets an unexpected visit from his descendant from the future who inserts nano machines into his body. As a prince born from a peasant mother, Chun Yeowun is forbidden to learn martial arts by the 6 highest clans of Demonic Cult, hoping the child would easily lose in the fight to determine the successor for the throne. However, with Nano Machine’s help, Chun Yeowun’s chance to defeat his step-siblings, and claim his right to the throne, is no longer impossible.

The Manhwa/Webtoon adaptation is currently published on Naver, being written by Hyeon Jeolmu and illustrated by Geumgang Bulgoe.