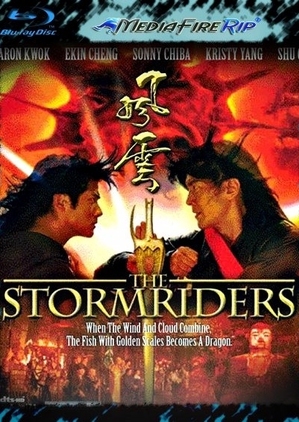 A good sword can help a novice, and make an expert really powerful. But most important is who is using the sword.
Advertisement:

Fung wan: Hung ba tin ha (known in English as The Storm Riders), is a 1998 Wuxia movie based on a long-running Manhua by Ma Wing Shing (writer of Chinese Hero).

Lord Conquer (Sonny Chiba) is a warlord who is told by the prophet Mud Buddha that if he finds and trains two young martial artists, Cloud and Wind, then he will be invincible for the first half of his life. Lord Conquer sets out to find Wind and Cloud, killing their fathers and raising them himself. Ten years later, he is well on his way to conquering the world. Then Mud Buddha reveals the prophecy for the second half of his life: as Wind and Cloud were responsible for his rise to power, so too will they be responsible for his downfall...

The movie is notable for being the first Wu Xia movie to extensively use CGI special effects.

The English-dubbed version released in the United States was badly Macekred, with large cuts making the plot nearly impossible to follow; the uncut subbed version is far superior.

There is a 2009 sequel titled The Storm Warriors and an Animated Adaptation, Storm Riders: Clash of Evils.