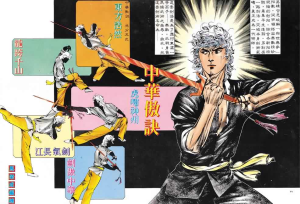 If you told Hua Ying-Xiong (literally "China Hero"), the young son of a blacksmith and his sword-master wife, that he would be protecting Chicago's Chinatown from Kung-Fu Mafiosi and dueling to the death with a blind samurai master on the Statue of Liberty 17 years from now, he would probably laugh. The boy was content flirting with his childhood sweetheart Jie Yu ("Pure Jade"), helping his father at the forge, and playing pranks on the arrogant Westerners who terrorized his village, like any other red-blooded Chinese boy during the Great Depression.

Fate, in all her cruelty, filled the hearts of the white invaders with greed for his family's priceless heirloom on his 18th birthday. Such was the Chi Jian, a sword of crimson metal that glows with murderous red when given its drink of blood. For this fabled weapon his parents were murdered. Avenging their deaths by killing the western murderers, Ying-Xiong himself was forced into exile in America.

Coincidence after miraculous coincidence followed in his journey in the west, as Ying-Xion chanced upon one Chinese master after another, who like himself had fled to America. Inheriting their combined strength, swordsmanship and martial arts, Hua Ying-Xiong became the champion of the Chinese people in the crime-ridden and racist city of Chicago by his 35th year. Standing alongside faithful comrades like Gui-Pu (Ghost Servant) the armless assassin and Lo-Han the monk, Ying-Xiong fearlessly wages war against the machinations of the Black Dragon Syndicate, a Western criminal army whose warriors' skills are such that they rival criminals who stoop to using guns.

Thus begins Chinese Hero (or "Zhong Hua Ying-Xiong"), the martial arts work of Hong Kong manhua (the Chinese equivalent of manga) artist Ma Rong-Chen. It is an epic melodrama of violence, compassion, evil, honor and bravery, featuring some of the most creative interpretations of western villains with kung fu.

The story reaches its high point in the "Invincible" arc, wherein Ying-Xiong is forced into conflict with Invincible, a samurai so obsessed with battle he abandoned his family and destroyed his own eyes to be rid of all "unnecessary" emotions. This culminates in a climactic battle on top of the Statue of Liberty, in which the pride of Chinese and Japanese martial arts is put to the test.

For another manhua by the same author, see The Storm Riders.

This manhua provides examples of: