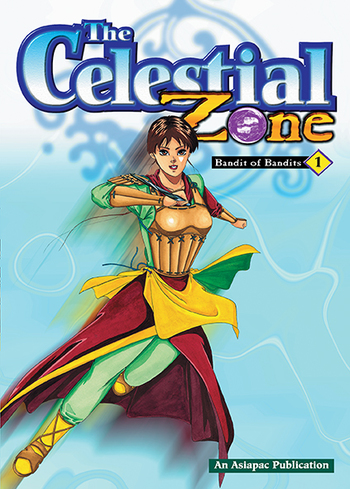 The Celestial Zone (often abbreviated as "TCZ") is a manhua series from Singapore by writer/artist Wee Tian Beng. The story takes place in ancient China during the Warring States Era, revolving around a group of people who are dedicated to the cultivation and pursuit of spiritual powers that grant them abilities beyond the ken of normal men. These extraordinary men and women are collectively referred to as being from The Celestial Zone. However, it isn't all rainbows and sunshine in The Celestial Zone, as the pursuit of power led to the formation of two factions: the righteous way, the de-facto good guys who have benevolent and selfless goals, and the evil way, who seek power solely for their self-centered and destructive ends. The plot revolves around the conflict between the two factions, and the various tales of those involved in the battle as good and evil fight for supremacy over the Celestial Zone.
Advertisement:

The original series debuted in 1999, concluding in the year 2003 and spanning a total of twenty-five black and white volumes. Since then, it has grown into a franchise in its own right, having spawned a spin-off adventure of one of its lead heroines, Chi Xue in a single-shot volume, as well as a proper sequel titled The Celestial Zone II which spanned the year 2003 to 2006, covering 40 volumes. A Spiritual Successor has since been created, a 40-volume long series titled The Celestial Zone 21, which deviates from the usual Warring States setting and instead takes place in modern times, and featuring a more sci-fi feel instead of fantasy. A second proper sequel has since been launched, The Celestial Zone X, featuring an almost entirely-new cast of characters, and recently concluding its run at its 32nd volume in March 2012. The story isn't over yet, however, as a follow-up series titled The Celestial Zone X-2 was announced and launched as of April 2012, taking over from where the previous series left off.

As of August 2018, The Celestial Zone X-2 has officially finished its run. With the conclusion of TCZ X-2, Wee Tian Beng has announced that he would be taking a hiatus from TCZ-related stuff and began a new series titled Neo Era, which is his first non-TCZ related series in nearly two decades.

The Celestial Zone provides examples of the following tropes: