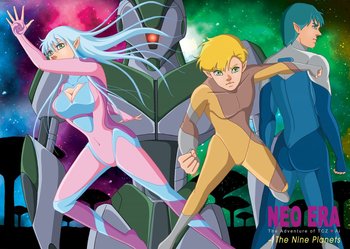 Welcome to a new world...
The latest manhua series by Singaporean artist Wee Tian Beng, after the conclusion of The Celestial Zone X-2 in 2018, with two volumes released to date, and it is the first non-TCZ related series to be done by Wee Tian Beng in nearly two decades. The story of Neo Era takes place at an unspecified point in the far future, long After the End. Humanity has gone extinct, and the Earth of the future has since been repopulated by a new generation of humanoids dubbed "Neo-Humans" - who basically resemble Space Elves with Psychic Powers.
Advertisement:

The Neo-Humans lived a peaceful and harmonious coexistence with their fellows and with nature, and life on this future Earth was generally tranquil and idyllic until three years before the beginning of the series, Killer Robots left behind by the ancient human civilisation began to reawaken and launch a series of unprovoked attacks on Neo-Humans. The story follows the adventures of three Neo-Humans Xiao Ai, Xiao Jie and Stoney, fighting off the encroaching robot army while racing to uncover the mystery behind what became of the ancient humans, and why did their robot army reawaken?