Manhua / My Wife Is a Demon Queen 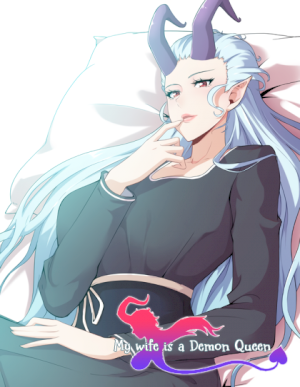 Garbage human! YOU ARE THE ONE TO SAVE THE DEMON TRIBE FROM EXTINCTION?!
Alt Name(s): 我老婆是魔王大人
Release Year: 2017
Author: Rong Rong, Chihung Yao
Artist: DW
Description: Listen up folks! I’m living my life with the demon queen!

Synopsis: Xiang Ye, near-friendless high-school student, whose parents have been overseas for years, goes to bed after marathoning an MMORPG raid event (the only social contact he has) on his summer vacation. He wakes up face to face with the Demon Queen of another world; Lady Isabella, Seventh Queen of the House of Osa, is steaming livid at her head priest for summoning a pathetic excuse of a "legendary hero" while a hostile army is ramming their front door. As the last of her magical power bleeds from her wounds and she takes on a human appearance, the summoning priest teleports them away, but enemy scouts from the near-psychotic Red Dragon Legion chance upon them and slaughter her guards, unaware of her true identity but all too eager to kill humans and demons alike. Xiang Ye's only hope for their continued survival in human lands is to proclaim Isabella as his human wife...