Music / All Things Must Pass 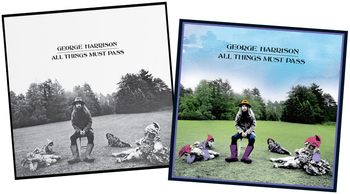 The original cover of All Things Must Pass, and the alternate cover, used on the 2001 reissue.
Advertisement:

All Things Must Pass is the third studio album by George Harrison, released in 1970. It is generally considered to be his greatest solo album and was an international commercial success, spawning the hit singles "My Sweet Lord" (his Signature Song) and "What Is Life". Unusually for the time, it was a triple album; it largely consisted of songs rejected by The Beatles when Harrison was still a member, with an additional disc of studio jams.

All Things Must Pass is the most commercially successful album by any former Beatle. Even to this day more copies of this album have been sold than any solo album by Paul McCartney, John Lennon or Ringo Starr.

Note: The final five tracks have been rearranged in reissues; "Out of the Blue" has been moved to the end of the album, with the other four remaining in sequence. This was Harrison's original intended track order.

I really want to trope you Lord, but it takes so long, my Lord: