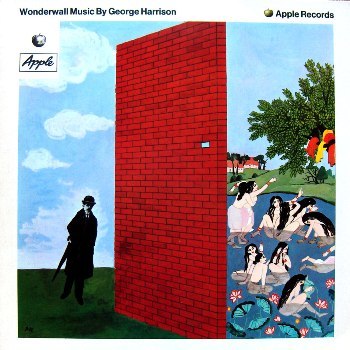 Wonder what's behind the wall?
"It's the greatest soundtrack I have ever heard."
—Quincy Jones, according to Joe Massot, director of Wonderwall (1968).
Advertisement:

Wonderwall Music is the debut studio album by George Harrison, released in 1968. It was released as a Solo Side Project while he was still a member of The Beatles. The album is the Cult Soundtrack to the film Wonderwall from 1968, making Harrison the second Beatle to compose a soundtrack and release it as a Solo Side Project after Paul McCartney's score for the film The Family Way from 1967. Wonderwall Music was the first release on the Beatles' label Apple Records and thus promoted as the first official "solo" Beatles record.

Sessions for this album took place both in Bombay/Mumbai, India as well as London. Harrison worked together with classical pianist and orchestral arranger John Barham, as well as Indian classical musicians Aashish Khan, Shivkumar Sharma, Shankar Ghosh and Mahapurush Misra. The rock sections feature contributions from Tony Ashton and the Remo Four, Eric Clapton, Peter Tork of The Monkees and Ringo Starr.

John Lennon's Solo Side Project Unfinished Music No. 1: Two Virgins was released a week later and became so notorious for its cover and Avant-garde Music noise that it effectively and unfortunately put Harrison's album a bit in the shadow, despite getting better reviews and higher sales.

Anyway, not to be confused with Oasis's Signature Song "Wonderwall", although its title was inspired by this album.