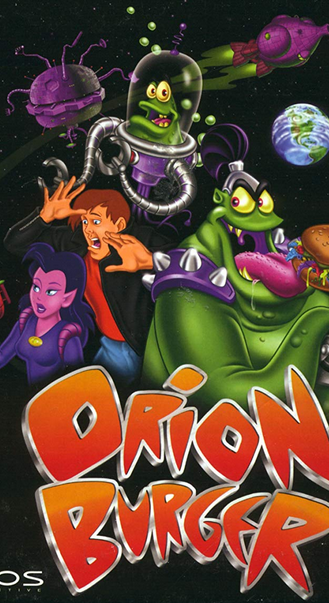 Orion Burger is an Adventure Game developed by Sanctuary Woods and published by Eidos Interactive for the PC and Macintosh in 1996. It features a young man saving the Earth from an interstellar fast food chain through a time loop.

The game was developed using M4, Sanctuary Woods' title for the MicroProse Adventure Development System. It was the company's second and final title not made for children, after The Riddle of Master Lu. The game also features a quite impressive cast of voice actors, including Rob Paulsen as the Player Character and Jim Cummings as the Big Bad.

The intergalactic fast-food chain Orion Burger uses the services of an alien meat-supplier named Zlarg, who only cares for money and doesn't have much in a way of conscience. So his next genius plan is to use the inhabitants of the planet Earth, known as "humans", as a raw, protein-rich material for the tasty burgers. However, environmentalist pressure is threatening Orion Burger's pretense that it only uses unintelligent raw materials, forcing Zlarg to abduct pet shop assistant Wilbur Wafflemeier from the sleepy American town of Boonsville and test him for sentience before scouring his planet clean.

Zlarg is still brazen enough to rig the tests, so that no creature can pass it, and — like planned — Wilbur fails miserably. In accordance with inter-galactic abduction protocol, he is supposed to be returned to the moment he left and remember nothing, but he gets a helping hand from the alien-rights activist Astra, who has smuggled herself on board the ship and sabotaged the teleporter. Wilbur arrives intact to a time one hour before his abduction with knowledge of what is going to happen, and has a chance to cheat back.

Gameplay consists of wandering around Boonsville, solving puzzles to gather gear and information for the aliens' five tests. Wilbur is abducted at regular intervals, tested, and returned to Boonsville through the failing teleporter for another iteration of the loop. Going back in time resets the town and empties Wilbur's inventory, but after Wilbur passes a test, he'll automatically (and instantly) prepare for it on all subsequent iterations. Some tests are puzzles themselves, others merely cutscenes.

Events happen at specific times, allowing Wilbur to take advantage of his foreknowledge. The player can also opt to skip straight to the abduction or give up on a test. The game cannot be lost or rendered unwinnable.