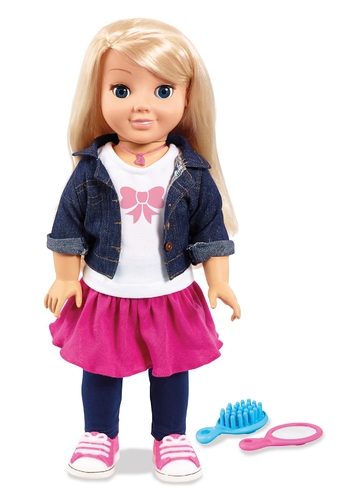 Look carefully. It's just a doll.
My Friend Cayla was a line of 18-inch dolls invented by Bob Delprincipe and sold by Genesis Toys. The doll is similar in size and proportions to the likes of an American Girl doll, but her main selling point is her Internet of Things capabilities, basically making Cayla a Chatty Cathy on steroids. At her core, Cayla is nothing more than a Bluetooth speaker stuffed into a doll, but through a companion mobile app, one could have a conversation

, ask questions and have the doll tell a story to its owner as if she were a real person. Which sounds cute on paper...
Advertisement:

...except the idea of an Internet-enabled doll for children would be criticized as being wrong on so many levels. Stranger Danger ensues, and Big Brother-esque concerns led her to be banned in Germany and restricted in other places, after a white-hat security researcher pointed out a glaring flaw in her design, leading to complaints and her eventual discontinuation.

The resulting controversy led to the doll's inclusion in the Museum of Failure traveling exhibition, where similar failed products and services which were either commercial failures or are controversial in their own right are on display, and one of the dolls is exhibited alongside the likes of a copy of No Man's Skynote While the game's reception did improve over time, it was initially critically panned for various reasons and failed promises, hence its inclusion. and an N-Gage, highlighting some of the notable failures in the tech industry. Another example was donated by a concerned German mother to the German Spy Museum in Berlin, marking the first time a toy was included in the exhibit.

My Friend Cayla provides examples of: