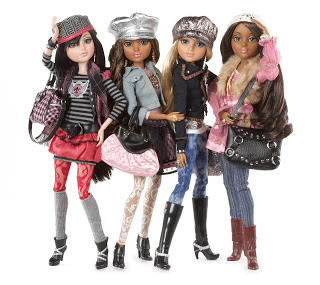 Moxie Girlz was a line of fashion dolls introduced by MGA Entertainment in 2009. These dolls are targeted at girls ages 6+. The four original 10.6-inch dolls are named Lexa, Bria, Avery, and Sophina, with others named Kellan, Monet, Merin, Ida, and Amberly.

The Moxie dolls are reminiscent of Bratz, having the distinct pop on/off feet and long hair, but with features consisting of large eyes and proportioned noses and mouths fitting to their head-size. Moxie Girls were meant to replace Bratz, given that Mattel sued MGA over the original design. However, Bratz returned to the market in August 2010.

Unlike the original dolls, the Moxie teenz girls stand at fourteen inches tall and they tower over most other playline dolls. They feature glass eyes, articulating joints and removable hair for wig styling. The Teenz are a companion line to the Girlz aimed at older girls.

As of 2014, it appears both doll lines are discontinued.