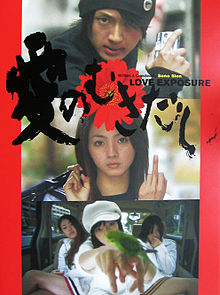 Love Exposure is a 2008 film by Shion Sono of Suicide Club fame. It clocks at in three minutes shy of four hours long. It focuses on the themes of family, love, lust, religion, and upskirt photography.

The film follows Yu Honda, a Catholic teenager in Japan, whose mother tells him to find a woman like the Virgin Mary before her death. His father Tetsu later becomes a priest, and the two live a seemingly peaceful life until a woman who comes to their church falls in love with Tetsu and shakes his confidence in doing his job. After she leaves, Tetsu makes Yu come to confession daily. As Yu believes himself to be a good person, he has very little to confess, so he makes up small sins. After this approach fails to appease his father, he begins to purposely commit sins to appease his father. This leads to him associating with gang members, learning to fight and commit crimes, until eventually he becomes involved in upskirt photography.

And that's barely even the first half-hour.

Sono had made a two-hour long cut of the film to appease his producer, but the numerous cuts to the story made for some confusing plot holes. The original cut was six hours long. The four-hour long final cut was meant as a compromise.

The film gained a certain amount of notoriety throughout festivals both for its length and for its irreverent handling of religion. The film has gathered numerous awards, most notably the FIPRESCI Prize and the Caligari Film Award at the Berlin International Film festival.