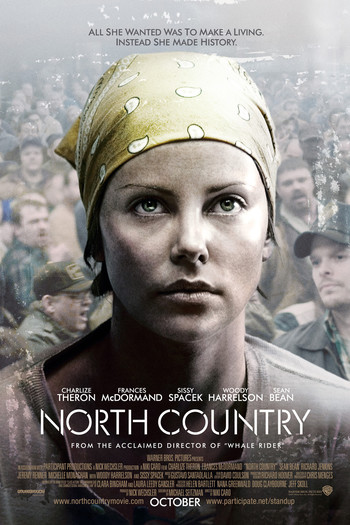 North Country is a 2005 drama film directed by Niki Caro and inspired by a real-life class action lawsuit from 1988.

The story begins with Josey Aimes (Charlize Theron) leaving her abusive husband with her two children. Because she has no job perspectives, she is forced to move back in with her parents in her Minnesota hometown. There she meets her old friend Glory (Frances McDormand), who helps her get a job at the local iron mine and lets Josey and her children stay with her and her husband Kyle (Sean Bean).

On her first day at work, Josey is harassed by her co-worker and old high school boyfriend (Jeremy Renner). Josey quickly finds out that the female workers are being verbally and physically abused by men who feel like they are taking away their jobs. When Josey refuses to keep quiet like the rest of the women, things get ugly for her.

The title is based on the Bob Dylan song "Girl from the North Country".