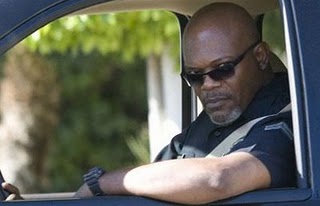 Welcome to the Neighborhood.
"You guys are lucky. You have a cop livin' next door..."
Advertisement:

Lakeview Terrace is a 2008 film directed by Neil LaBute (In the Company of Men, Death at a Funeral) and produced by Will Smith. The film stars Samuel L. Jackson, Patrick Wilson, and Kerry Washington.

Chris Mattsen (Wilson) and his wife Lisa (Washington) are a young, recently married interracial couple who have just moved into a "starter home" in an upper-middle class neighborhood near Los Angeles, California. Looking forward to starting their brand new life together, the Mattsens have few worries aside from getting settled in, and when they should start talking about starting a family. That is, until they meet their new neighbor, Abel Turner (Jackson).

Abel is an old-fashioned, conservative beat cop who has spent the last several years after his wife's death raising his two children in the very same neighborhood. He disapproves of Chris and Lisa's relationship, and wastes little time in letting them know how he feels about it... even going so far as to make vague threats, turn his security lights so that they shine directly into the couple's bedroom window, and sabotaging things around the house. When Chris responds in kind in an effort to show Abel that they are there to stay, the situation quickly escalates. With no fear from police interference due to being a cop himself, Abel becomes increasingly determined to drive his new neighbors out, and is willing to use any means necessary to do it.