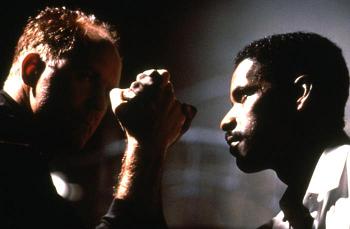 "I mean, there we were, both of us, at the beginning of our careers. And all of a sudden, one of us took off, lit up the sky like a meteor! And why? Because he met the other."
— Earl Talbot Blake
Advertisement:

Nick Styles (Washington) is a young cop who is studying to become a lawyer so that he can help make his neighborhood better. Earl Talbot Blake (Lithgow) is a hitman who is taking a job to make it into the big leagues. Chance pits these two men against each other, and Styles walks away as a hero and having achieved the career he has sought while Blake is sent to prison with nothing. This leads to Blake becoming obsessed with Styles, and as he climbs the ladder of success, Blake follows every step, plotting his revenge. Years later, Styles has risen to become a star Assistant District Attorney. Blake finally escapes from prison and then starts a campaign to destroy his life.