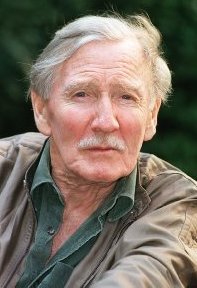 Ding dong! note If you are ever lucky enough to meet Leslie, please don't ask him to say this, he finds it embarassing.
Advertisement:

Leslie Samuel Phillips CBE (born 20 April 1924 in Tottenham, London) is an English actor, known for his appearances in the Doctor in the House, Carry On, Harry Potter and Gex. He began his career in television and radio at the beginning of The '30s as a young man with mostly uncredited roles in the early years, and then became well-known in his recurring appearances as Tom Bridger in My Wife Jacqueline from 1952.

Later in the decade, he appeared as minor characters in three of the early Carry On films: Carry On Nurse, Carry On Teacher and Carry On Constable. He then told producers that he wouldn't be returning for any future films after Constable (although he did appear later in the poorly-received Carry On Columbus in 1992) and began appearing in the Doctor In The House films as well as becoming a frequent radio personality in the 1960s and '70s in the long-running The Navy Lark on BBC Radio 2.

After his marriage to You Rang, M'Lord? actress Angela Scoular in 1982, Phillips turned away from comedic roles and appeared in Empire of the Sun and Lara Croft: Tomb Raider, and later received an OBE in 1998; he also provided the voice for the Gecko on the British release of Gex: Enter the Gecko in the same year. In the 2000s, he provided the voice of the Sorting Hat for the Harry Potter films, voice acting in Philosopher's Stone, Chamber of Secrets and Deathly Hallows (part 2), then he became nominated for a BAFTA for the film Venus and received a CBE on top of his OBE in 2008. When Scoular died in 2011, he remarried to Zara Carr two years later.

Phillips hasn't been in the media much recently, however his health problems have raised a few stories, such as reports of strokes and seizures throughout 2014 and '15, but he's fortunately recovered from his treatment and continues to press on well.