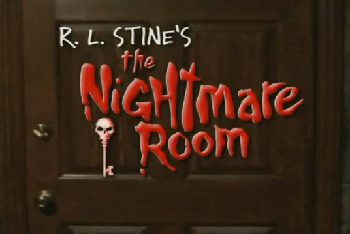 When the lights fade and the moon rises, anything can happen. The world becomes a carnival of shocks and chills. A whirling merry-go-round that never stops, spinning faster and faster, taking you on a frightening ride. I'm R. L. Stine, don't fall asleep... or you might find yourself in The Nightmare Room.
Advertisement:

The Nightmare Room is a series of YA horror books written by R. L. Stine in the early 2000s. Much like Goosebumps, it is a horror Genre Anthology series featuring a different short story filled with young kids facing off against ghosts, monsters, and other supernatural beings. Unlike Goosebumps, the stories are much darker and the kid heroes don't always win in the end.

It mostly pools from from The Twilight Zone (1959) with its title, and its storytelling style.

It was adapted for television series in 2001 as part of the Kids' WB line-up. Sadly, the show only lasted for 13 episodes.

Tropes that apply to both the books and the show include

Tropes that apply only to the show include