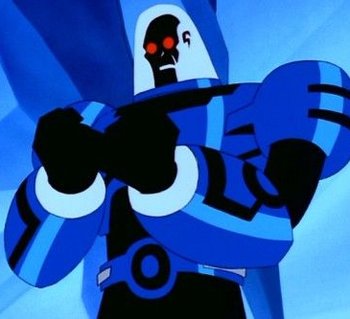 Freeze returns for one more round
After burning through yet another artificial skin, Powers starts to become impatient over his doctors' inability to find a cure for his condition. One of them, Dr. Stephanie Lake, suggests an experimental procedure to transfer his mind into a new, healthy cloned body. To test the procedure, they perform it on Mr. Freeze, whose head had been stored in Wayne-Powers for over 40 years. With a new body and a second chance at life, Victor Fries promises to right the wrongs and suffering he caused to his victims. Terry becomes hopeful that Fries has truly changed for the better, but Bruce isn't convinced.