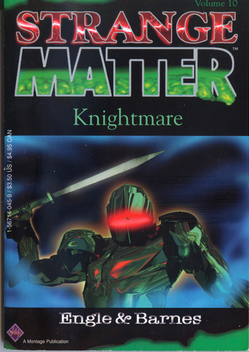 Strange Matter is a children's horror series that ran 1995-1997 and was writen by Marty M. Engle and Johnny Ray Barnes Jr. It followed the students at Fairfield Middle School' encounters with supernatural phenomena. While similar to Goosebumps in overall concept, many of its plotlines were noticeably darker, and it was aimed at slightly older readers. Deaths of human beings, including teenagers, could actually happen onstage, particularly in the Strange Forces series. It didn't shy away from very frightening imagery and Fate Worse than Death scenarios were common. It also shared R.L. Stine's penchant for Twist Endings.

The series is notable for using CGI images that were incredible for its time on both its covers and the scenes within the flap that depicted parts of the story. It was also one of the first children's series to integrate the internet into its reading, with the now sadly defunct strangematter.com featuring bios, scenes and plot information from the books and actually being referenced in-universe during the Strange Forces saga.

The series has sadly been out of print since the early 2000's but the Strange Forces series can be read on Kindle Unlimited.

. The book Creature Features was "adapted" into an episode of The Haunting Hour.