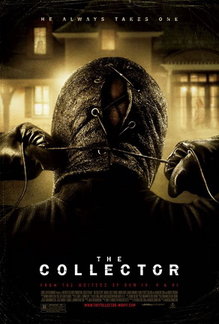 The Collector (2009) is an American horror film. Arkin O'Brien (Josh Stewart) is a ex-con that breaks into a house to steal valuables, only to discover that a second person has already broken in, captured the residents, and has set up a variety of high-concept booby traps. Arkin is forced to try to figure out a way to save those he intended to rob, and also fight to survive.

A sequel, going by the title The Collection, was released on November 30, 2012, and was marketed as the real Black Friday. The third movie in the franchise, The Collected, was announced on May 2, 2019. In May 2021, The Collected was confirmed to be cancelled.

No relation to 1963 thriller novel (and subsequent 1965 film) The Collector, about a psychopath who kidnaps women.

The Collector and The Collection provides the following tropes: