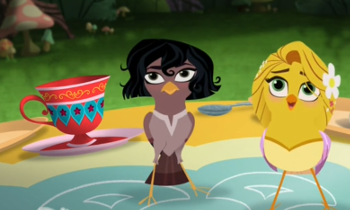 You'd become a bird brain. You'd not only look like a bird, you'd think like a bird. Your desire to be the person you once were would dissolve, and you'd remain a bird... forever.
— "Father"
Advertisement:

Still travelling through the woods, Rapunzel and Cassandra take a walk through the woods and then stumble upon an elderly couple living in a cottage in the woods. When they drink some tea with these people, it turns out it was a magical potion—and now Rap and Cas have been transformed into birds, for what they are told will last an hour. Initially Rapunzel is very happy with this as she sees it as an opportunity to experience freedom, but then they realise the couple has no intention of transforming them back to humans.

Meanwhile, Eugene, Lance and Hook Foot have a brawl and fight about who's the strongest and manliest man.

Example of:
Destroy the Villain's Weapon