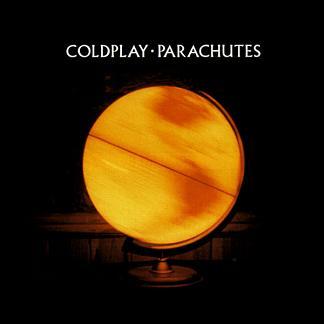 Parachutes is the debut album of English Alternative Rock band Coldplay, released in 2000 by Parlophone Records.

It spawned the hit singles "Shiver", "Trouble", "Don't Panic", and especially "Yellow", the band's Breakthrough Hit and one of their Signature Songs. The album was a critical and commercial success, selling 8.5 million copies worldwide as of 2011 and winning a Grammy Award for Best Alternative Music Album.

However, the album attracted criticism from listeners who felt that its moody alt-rock sound was uncannily similar to that of Radiohead, particularly their 1995 album The Bends; some outlets proposed that at least some of the album's success was attributable to listeners being alienated by Radiohead's electronic and heavily experimental Kid A, which was released later that year (incidentally, the switch in style on Kid A came about in part from the heavy amount of Radiohead imitators that emerged following the success of OK Computer in 1997).

Coldplay frontman Chris Martin has stated that the band looks back on Parachutes negatively.

Look at the tropes, look how they shine for you...