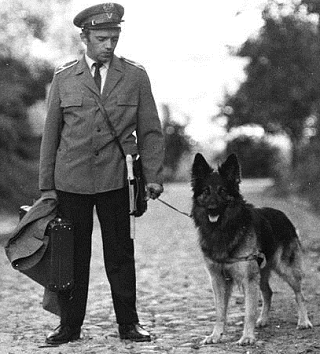 Przygody psa Cywila ("The adventures of Cywil the dog") is a Polish seven-episode series made in 1968-70 (yes, Heroic Pet Story meets Buddy Cop Show is Older than You Think), optimistic, idealistic and nice (despite the protagonists working for MO).

A Training Facility for Militia Dogs has a new litter of puppies - unfortunately, there's seven of them, which means one has to be put down (who came up with these rules?). Seven proves to be a lucky number, though, as sergeant Walczak, who has a soft spot for Precious Puppies, steals the surplus one to raise it himself. Named Cywil translation civilian, the puppy grows up to invert Dogs Are Dumb spectacularily - so spectacularily he does, in the end, get to be a police dog.

And so they go on to thwart criminals!

Look at the tropes Cywil found: