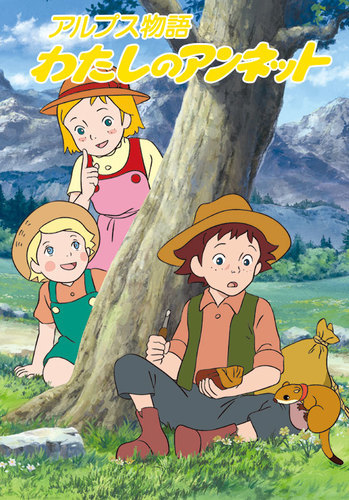 Many remember an old anime about a bright and plucky little girl who lives in the Swiss Alps, where she spends most of her time with an awkward Book Dumb boy who is also her inseparable best friend...Heidi, Girl of the Alps? Not at all.

Alps Story: My Annette is a Japanese anime released in 1983 by Nippon Animation, based on the children's novel Treasures Of The Snow written by Patricia St. John. It is the 9th entry of World Masterpiece Theater series.

Despite the cheerful atmosphere of the pilot about Annette and her friend Lucien, the story quickly takes a dramatic turn: Annette's mother dies after giving birth to Dani, Annette's little brother, whom Annette loves a lot and takes care of him like a surrogate mother. Five years later, Annette's friendship with Lucien is ruined when the latter becomes an Unwitting Instigator of Doom, accidentally causing Dani's terrible accident which leaves the child permanently unable to walk without crutches. Wracked with guilt, Lucien spends the rest of the anime trying in every way to reconnect with Annette and her family, but it's much harder than he thought, as Annette is still very angry. Will she ever forgive her old friend?

Many tropes in this series are already covered at Treasures Of The Snow. Here there are only tropes exclusive to the anime.