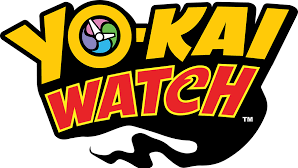 Yo-kai Watch is a mon franchise by Level-5. It started out as a video game on the Nintendo 3DS and has expanded into several manga and an anime adaptation.

The series is about a child - a male playable character named Nate or a female playable charater (Katie from 1 and 2, Hailey Anne in 3) - in Springdale. One day while looking for bugs in the woods they come across a capsule machine. When they open up one of the capsules they find a yo-kai named "Whisper" who, in his gratitude, decides to become their butler. He gives them a special watch called the "Yo-kai Watch" which allows them to view yo-kai. By befriending local yo-kai the protagonist gains medals, which can be used to summon other yo-kai to battle yo-kai that are causing trouble around town.

Starting with the fourth game and with the sequel anime Shadowside, the series has taken a Tone Shift. It now takes place 30 years in the future and stars Nate and Katie's teenage daughter. The yo-kai are much scarier and more realistic looking, though it's still kid-friendly and has its fair share of humour.