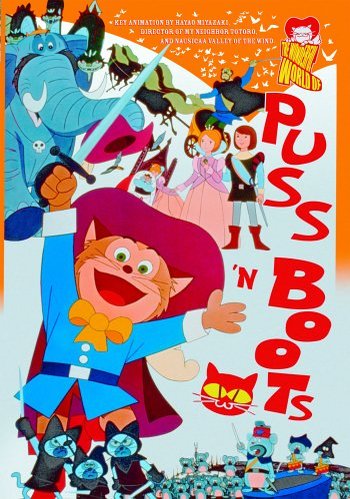 The film behind the mascot of Toei Animation. Released in 1969 as a full-length animated feature, Nagagutsu o Haita Neko ("The Cat Who Wore Boots") follows the story of Puss ‘n Boots, here named Pero, after he escapes execution and flees into the countryside where he has to fend off against three bumbling cat assassins all for the crime of saving a mouse.

Despite its namesake, the film is largely a reimagining/expansion of the fairy-tale with many changes added to it in order to flesh out the characters and plot. The biggest being that the titular cat is actually a kind-hearted fugitive who meets the three miller’s sons by chance, rather than simply being a mysterious gift or inheritance like in the original.

Upon first meeting, our hero Pero observes that the third and youngest son, Pierre, is bullied and enslaved by his older brothers, who plan to keep their late father's fortune to all to themselves instead of dividing it fairly between the three. Once exposed, they kick Pierre out of the house and leave him with only a sack of potatoes to eat. From then on, the two decide to stick together and Pero hatches a plan to marry Pierre to the lovely but lonely Princess Rosa, and take down Lucifer, an all-powerful ogre sorcerer who plans to force the princess to marry him in three days. All whilst fending off against incompetent but persistent cat assassins along the way.

Directed by Kimio Yabuki, though the film is better known by the animators that worked on it such as Hayao Miyazaki, Yasuo Otsuka, Super Mario Bros. promotional artist Yoichi Kotabe and his wife Reiko Okuyama, the list goes on. See here for more information.[1]

The film spawned two sequels along with two videogames:

The Wonderful World of Puss ‘n Boots
Ringo Rides West
Puss in Boots: Around the World in 80 Days