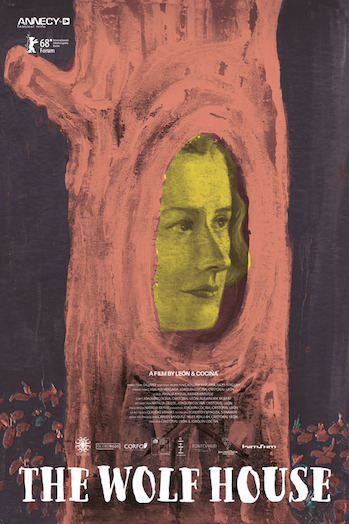 I hope you will learn to appreciate our colony just a little bit more...
As shepherd of this community I hope to dispel the horrible rumors that have stained our reputation.
Advertisement:

The Wolf House (original Spanish title: La Casa Lobo) is a 2018 Chilean Stop Motion animated film by Cristóbal León and Joaquín Cociña. It is presented as a fairytale-like propaganda film for a cult heavily based on Colonia Dignidad

, a secretive organization founded by German émigrés, which became infamous for the internment, torture and murder of dissidents during Augusto Pinochet's dictatorship.

A disobedient woman, Maria, flees the community after letting three pigs escape, and takes refuge in an isolated house in the woods where she finds two pigs. Naming them Pedro and Ana, Maria imagines them as her children and they begin to grow anthropoid attributes until they are completely human. As they live an isolated, idyllic life, a wolf stalks them from outside, imploring Maria to come back... but soon Maria realizes the wolf may not be the only thing she has to worry about.