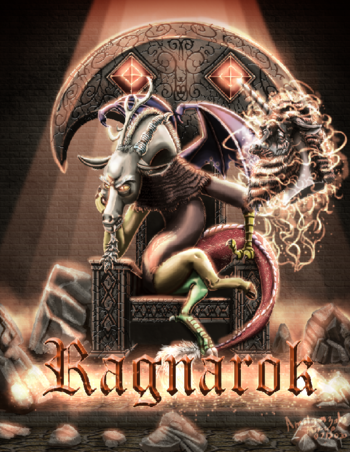 Loki on his throne.
Advertisement:

is a shared setting of My Little Pony: Friendship Is Magic fanfiction stories created by DannyJ

, based on the first six seasons of the show, the official IDW comics, and many other elements of MLP:FiM's early expanded universe. In the vein of the Triptych Continuum and similar settings, the Borderworld was originally intended to be canon compliant, filling in the gaps between episodes, but the author abandoned this by the later seasons as canon went in its own direction.

The setting is named for sitting on the border between various other realms and universes, with Equestria's world being the Midgard of its own Nine Realms, and saturated with interdimensional portals and gateways, all of which had a profound effect on Equestria's history and development.

Borderworld stories generally focus on adventure and the larger cosmology of the world, particularly the Eternal War that Discord and several other gods fight in, but they can vary greatly in tone, genre, and scope. The Borderworld also contains stories taking place in alternate timelines and universes, and in the distant future and past.

While mostly taking place in the same setting, the vast majority of Borderworld stories can be read as stand-alones.

, and the author's essays on the background of the world can be found here

The Borderworld contains examples of: