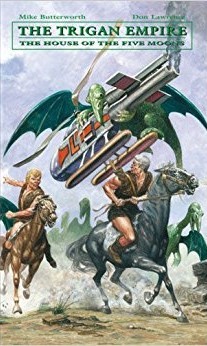 Monsters, helicopters, barbarians on horse, uh, kreedback... Oh, it was probably just Thursday.
It was the best of comics, it was the worst of comics. The artwork was better than any other of its time, the writing was so overblown it would have been laughed out of a pulp magazine. It aspired to tell the history of a whole civilisation, but the writers were making it up as they went along.
Advertisement:

The Trigan Empire was published in installments in a number of British and European comics during the 1960s and '70s. The artwork was originally by Don Lawrence (also known for Storm), and was way better than anything else available at the time; indeed, you'd have to look to modern day artists as Alex Ross or Serpieri to see it bettered, yet Lawrence was paid a pittance.

The story is set A Long Time Ago, in a Galaxy Far, Far Away... on the planet Elekton, which has twin suns and twin moons (although another "moon", Gallas, falls to the planet in an early story). The Trigans look basically human, although they stand 12 feet tall (in the stories they appear normal since everything else that looks vaguely Earth-like is also twice the as tall); the Trigan race looks Aryan, but there are no black people, apart from the occasional dark-skinned tribe that pops up in a supporting role, generally depicted as primitive but friendly. The main recurring non-white races are green-skinned, ranging from yellowish to turquoise with little consistency between episodes. The Lokans, enemies of the Trigans, are pale olive green, and look like a cross between very ugly black people and Yellow Peril-type orientals. In fact, they were yellow, in the early stories. Daveli are a more turquoise colour, and are very good-looking. Their chief, Imbala, is Trigo's blood brother, and Imbala's son Keren is one of the good guys, usually the only non-white among the good guys.

To begin with, the story was entitled The Rise and Fall of the Trigan Empire, and tried to trace the development of the eponymous civilisation from a humble beginning as a bunch of nomads to becoming the greatest power on the planet. Presumably, a decline was supposed to happen after this.

However, as the story progressed, it became a series of adventure stories featuring the same cast of characters, principally Trigo, the emperor; Brag, his brother; Janno, Brag's dashing son; Keren, Janno's friend; Peric, a wise architect and scientific genius, and his daughter, Salvia. Later, Janno and Keren aquired another friend, Roffa, and Trigo had three sons of whom one, Nikko, lived to be a major character.

In the early stories it made sense that the leader should do his own adventuring, as he was a young hero founding an empire, but later it made even less sense for the leader of a superpower to keep running about swashbuckling and leading expeditions than for The Captain of the Enterprise to keep leaving The Bridge to lead landing parties in person. But that never stopped Trigo, any more than it stopped Kirk or Picard.

The writing style was very purple. Probably not since Robert E. Howard wrote that Conan the Barbarian was destined to "Tread the Jewelled thrones of the world beneath his sandalled feet" has there been more overblown verbiage in a piece of popular entertainment. Certainly, not many characters in modern comics "slake their ravening thirst" at waterholes or "feel the icy fingers of terror course down their spines"; but maybe the world of comics, and the English language, are the poorer for it.

The writers and artists often got things wrong. A fleet of hundreds of aircraft was retconned into six aircraft between one episode and the next of the very first Story Arc. Trigo confronted a sabre-toothed tiger (the Sacred Yalt) wearing his breastplate and cloak; by the time he wriggled free of its claws, he was wearing the remains of a white shirt. And so on; but a fan could forgive that.

Another problem was that, as time went by, there were fewer and fewer new ideas available, and old ones had to be recycled without even observing the Fleeting Demographic Rule. The most common stories were:

Overall, the story quality could be cheesier and mouldier than a well-matured Stilton, but there was still something great about it. It has the same kind of place in the hearts of its fans that the old Batman (1966) show with Adam West has.

Not to be confused with Trigun.