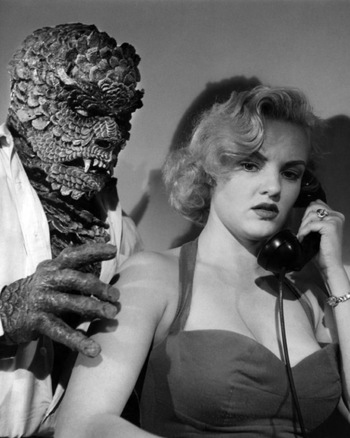 "Excuse me, miss, I need to use the phone!"
Advertisement:

A 1959 Sci-Fi Horror B-Movie written and directed by Robert Clarke, who also starred as the title character. Originally titled Sauros, the story was envisioned as taking place in Guatemala where an expedition seeking uranium deposits encounters a man turned into a monster, it was rewritten to take place in the United States instead due to budget problems, and the monster was also made the main character.

Dr. Gilbert McKenna, a research scientist, suffers a lab accident which causes him to turn into a reptilian monster when exposed to direct sunlight. Unable to deal with the stress of his predicament, Gil goes to drown his sorrows in a bar, where he meets a singer named Trudy Osborne (Nan Peterson). Staying indoors during the day and only going out at night, he attempts to lead a normal life, dating Trudy while his colleagues Ann Russell (Patricia Manning) and Frederick Buckell (Patrick Whyte) try and find a cure for him.

His world comes crashing down when Trudy's jealous wannabe mobster boyfriend George Messorio (Peter Similuk) interferes and attempts to run Gil out of Trudy's life — during the daytime. After transforming and strangling George, Gil goes on a good old-fashioned (if modestly budgeted) monster rampage. His colleagues struggle to help save him from himself, while the police want to hunt him down.

The movie was redubbed into a comedy version titled Revenge of the Sun Demon (also known as What's Up, Hideous Sun Demon? although it has never been released under this title). On YouTube, FredFlix transformed the movie into a pseudo-episode

of The Outer Limits (1963), complete with vintage 1963 commercials. Film historian Tom Weaver wrote an excellent book about the film as Volume #1 of his Scripts from the Crypt series, featuring extensive background information about the film as well both versions of the script, including Sauros. Volume #2 will be Indestructible Man.