Fanfic / Hail to the Jewels in the Lotus 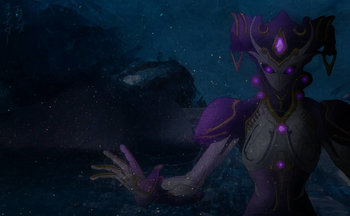 Their fingertips brushed. Hers were cold, but not frozen. Not cruel. The underside of her palm was shot through with gold, the gilding of a forgotten age. The word came to him clearly then. Tenno. note The original image belongs to Amendda_Rysden

"The Tenno were awake, they who had journeyed beyond the boundaries of reality and returned from the place the Orokin called Hell. Who can say how many they've saved from a life of darkness, and how many they've cast into the abyss. Every story is a piece of the puzzle, surah... and the universe is full of stories."
— The story's blurb
Advertisement:

The Origin System has long since been plunged into chaos. After the fall of the decadent Orokin Empire, the Grineer and the Corpus have carved it up for themselves, endlessly warring with each other for dominance. But the balance of power has shifted with the reappearance of the Tenno, virtual demigods clad in biomechanical armor called Warframes, from their centuries-long slumber. A single Tenno who can lay waste to small armies of Grineer or Corpus with frightening efficiency. Many refer to them as betrayers, deadly mercenaries out for the highest bidder. Others call them heroes of legend and the saviors of a system mired in entropy. Whatever they are, there are stories to tell of them, each of them a piece of the puzzle in a universe full of stories.

Hail to the Jewels in the Lotus

is an anthology of Warframe short stories written by Amendda_Rysden

on Archive of Our Own. They cover moments in the Origin System through the eyes of the Grineer, Corpus, and the Tenno themselves.

Hail to the Jewels in the Lotus contains examples of: