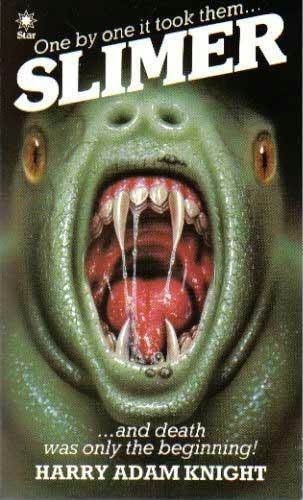 "One by one it took them... and death was only the beginning!"
— Cover Blurb
Advertisement:

Slimer is a 1983 science-fiction/horror novel by "Harry Adam Knight," a.k.a. Australian author John Brosnan, writing under a pseudonym. Brosnan also wrote the novels Carnosaur and The Fungus under this name. The novel was co-written by English author Leroy Kettle, however Kettle went uncredited. The novel was adapted in a 1995 film called Proteus by Brosnan himself.

Paul Latham, his girlfriend Linda Warner and their four friends Alex, Rochelle, Mark and Chris had been on a drug run from Morocco when their yacht sank. They had to abandon ship so quickly they lost all of their drugs (except for Alex's personal stash of heroin). By a seeming stroke of luck, they stumble across a seemingly abandoned oil rig. Going aboard, they discover the rig is actually a cover for a top secret lab run by a company called Brinkstone.

Some exploring reveals discarded, unfired guns and scattered, empty clothes. That night, a mysterious, unseen creature attacks them. Although Paul empties an M16 into it, this doesn't seem to harm it. They come across a scientist named Dr. Shelley who says the creature is nicknamed "Charlie" and won't harm them again. Although he promises he'll explain more later, he is missing the next day. Later a security officer confronts the group, offering to help, but before their startled eyes turns into "Charlie," a monstrous creature which wounds Rochelle.

Paul and the others eventually discover that "Charlie" is actually a great white shark given shapeshifting abilities by an experimental compound called "Phoenix." It absorbs the minds and bodies of its victims, and can take their shape, and they're next. To make matters worse, the increasingly hostile Alex begins antagonizing everyone at every turn, questioning Paul's leadership and threatening to be as dangerous to the group as the monster itself.

Has nothing to do with the green ghost of the same name from Ghostbusters.

Long out of print, it was finally reprinted in 2017 with a new introduction by co-author Leroy Kettle.