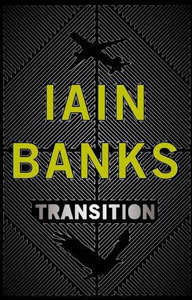 Transition is a novel by Iain Banks, first published in 2009.

It is based on the premise that a virtually infinite number of parallel dimensions do indeed exist. Set between the dismantling of the Berlin Wall and the destruction of the Twin Towers, Transition centres on a shadowy organisation called 'The Concern' whose members can transport their consciousness into the bodies of unsuspecting people in other dimensions by ingesting a drug called Septus and thus meddle with the socio-political development of other Earths.