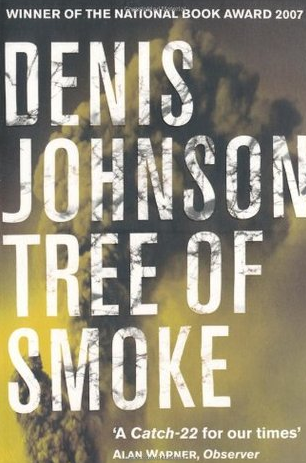 "Young men, while you live," he told them, "find out how to wake up from this nightmare."
Advertisement:

Tree of Smoke is an esoteric war novel written by Denis Johnson and first published in 2007, winning the National Book Award for Fiction. It is very long, very nightmarish, and almost too metaphysical for its own good. Despite being advertised as an epic novel about The Vietnam War, Johnson's work is about a lot more than just that.

Due to its slow pacing, penchant for low-key dialogue, and horrifically dreamlike atmosphere, the book has become known for being somewhat divisive among readers. There's no single protagonist (although there are several related plot threads), the protagonists are deeply flawed at best and downright bizarre in their actions and motives at times.

The closest thing to a "hero" the book has is Colonel Sands, a retired war hero who leads an operation in Vietnam with the help of the CIA. A bit zany in his antics, although trust us when we say he's one of the most sane characters in the entire book.

Tree of Smoke contains examples of the following tropes: