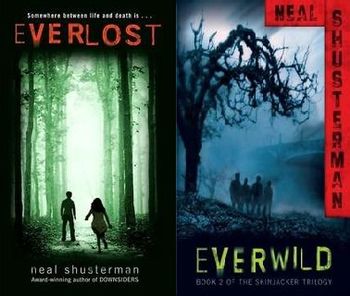 A trilogy of the adventures of Nick and Allie through the mysterious world of Everlost by Neal Shusterman.

... but their souls don't exactly get to where they're supposed to either. Instead, they're caught halfway between life and death, in a sort of limbo known as Everlost: a shadow of the living world, filled with things and places that no longer exist. It's a magical, yet dangerous place where bandits of lost children run wild and anyone who stands in the same place too long sinks to the center of the Earth.

There was a rumor of a beautiful sky witch, who soared across the heavens in a great silver balloon. And there were whispers of a terrible ogre made entirely of chocolate, who lured unsuspecting souls with that rich promising smell, only to cast them down a bottomless pit from which there was no return.

Everlost, the limbo land of dead children, is at war.

It becomes clear that the outcome will determine not just the fate of Everlost, but the fate of the living world as well.