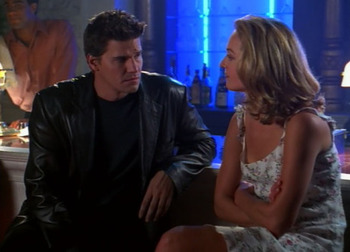 At the office, Angel sits in the dark, alone. He blinks when the lights come on and Doyle arrives, with a Friday-night plan for the three of them to go out together. Besides trying to get Angel to break his isolation, Doyle also has a personal agenda—he wants Angel to put in a good word with Cordelia for him, without letting her know about his demon heritage. Angel is just declining to arrange a date between his coworkers, when Cordelia arrives with a box of the calling cards she had printed up for Angel Investigations. Angel, clearly at a loss, guesses the little angel drawn on them is a butterfly, while Doyle, trying futilely to impress Cordelia, guesses the graphic depicts a night-hunting owl. Just as Cordelia whacks him on the arm in mock disgust, Doyle is seized by a vision of a night club, accompanied by an impending sense of calamity. Angel goes out clubbing with Doyle and Cordelia after all.

Meanwhile at D'Oblique, the club in Doyle's vision, a young woman named Sharon Reichler sits alone at the bar, unaware she is observed by a man named Kevin. He approaches her and they move to a table to get acquainted. Lonely and desperate, Sharon and Kevin soon make a real connection and leave the club together, just after the Angel Investigations team arrives. Cordelia immediately begins to pass around Angel's business cards, until Doyle stops her, cautioning her to stay "under the radar", since some people might label Angel the "v-word". Cordelia guesses "vampire", but Doyle means "vigilante". After briefly talking with the bartender, Angel makes no progress with people near the bar until a woman named Kate asks if he's all right. Intrigued by this apparent reflection of his intentions, Angel awkwardly strikes up a conversation with Kate, who also seems inept at the social scene. Despite a slow start, Angel and Kate find enough in common to make what they both consider to be a true connection.

Across the room, a rude guy mockingly speculates that the AI calling cards give Cordelia's number for sexual services, and Doyle tries to stand up for her. When Cordelia gets indignant, and the rude guy is backed up by his rude friend, Doyle stops negotiating and wades in. Having just declined Kate's invitation to go someplace quieter (making Kate suddenly very frosty), Angel charges into the fight and thrashes both guys, before the bartender ejects them as known trouble-makers. A stylishly turned out woman, impressed by Angel's heroic actions, coyly introduces herself. Angel gamely follows her lead, trying to ascertain whether she might be the person Doyle's vision didn't show. As he banters, Angel notices Kate watching, seeming hurt and angry, and, in turn, helplessly watches her leave the club.

The next morning, after spending the night with Kevin, Sharon calmly gets dressed, unperturbed by the bloody sheets and Kevin's dead body on the bed. At the office, the team spends the day researching any past incidents connected to D'Oblique. Their search turns up a badly mutilated woman and an eviscerated man, both known to have been at the club. Doyle and Cordelia research on demons that cause evisceration to their victims and find several suspects, including the Piasca and an unnamed demon. Meanwhile, Angel goes back to D'Oblique to see if he can spot the killer. On his way in, Angel literally bumps into Kate, who takes umbrage when he tries to warn her of a suspiciously non-specific danger. Inside, Angel talks to the bartender and another patron and finds out that Kevin disappeared after going home with Sharon. After asking a few more questions, Angel tracks Sharon down, then runs straight to her place to try to prevent the next murder.

Angel arrives at the apartment just in time to see that Sharon is dead while Neil, the geeky guy she took home, is alive and hosting a parasitic demon. Angel and the demon fight, but it gets away just as Kate arrives and finds Angel leaving the crime scene. Pulling a gun on Angel, Kate reveals she's a detective with the LAPD, and arrests him. When Angel sees that Kate won't be convinced he's not the killer, he breaks out of her grasp and dives out the third floor window. Meanwhile, the demon goes back to D'Oblique to find another host body. As dawn approaches, Angel makes his way to Cordelia's dingy apartment, not knowing that Kate has gone to illegally search his own place. Waking Cordelia and Doyle, Angel asks them to research eviscerating burrowers—demons that move from body to body, endlessly seeking the perfect one to live in forever. They discover their burrower is vulnerable to fire. Seeking help to destroy the powerful demon, Angel calls Kate and requests a meeting, asking for five minutes to explain himself, to prove that he isn't the killer. Later that night at the club, Kate asks the bartender to notify her when Angel arrives. A few minutes later as she fends someone off, the bartender tells Kate he thinks Angel is out back but, when they get there, the bartender smashes a wine bottle into the back of Kate's head. Angel arrives just in time to keep the burrower demon from transferring to Kate's body, forcing it back inside the bartender. Though weakening, the bartender host is still strong enough to fight Angel until Kate recovers somewhat. Then, not wanting to deal with them both at once, the demon tosses Kate and Angel down into the basement and locks them in.

While the demon cruises for a fresh, undamaged body—having little luck "making a connection", given the bartender's blood-soaked shirt and peeling skin—Kate and Angel finally escape D'Oblique's basement and split up to search. Angel locates the bartender first, and again battles the demon in its bartender host, which is still strong enough to injure Angel. Still waiting for Kate to back him up, Angel barely manages to throw the demon into a nearby burn barrel before collapsing to the pavement. Ignited by the fire in the barrel, the bartender host is immediately engulfed in flames. Howling, the demon lurches purposefully toward Angel, who helplessly watches, unable to move. Circling back, Kate arrives just in time to shoot the bartender, knocking him to the ground and halting the attack on Angel. After more police and emergency services arrive on scene, Kate gets a moment alone with Angel. She admits that she never would have guessed the bartender was the killer, thanks Angel for saving her life earlier, and confesses to searching his apartment. Agreeing that the bartender had ample opportunity, Angel makes no mention of a body-hopping, parasitic demon being the real killer. Then, after thanking Kate for saving his life as well, Angel asks why she chose to tell him of her illegal search. When she says she wants the two of them to start over from the beginning, with no secrets between them, Angel pauses almost imperceptibly, then agrees.

At the office, Angel generously and very awkwardly suggests that the three of them go out together, but is deeply relieved and gratified when Cordelia and Doyle instead take pity on him and leave him to brood in the dark, alone.