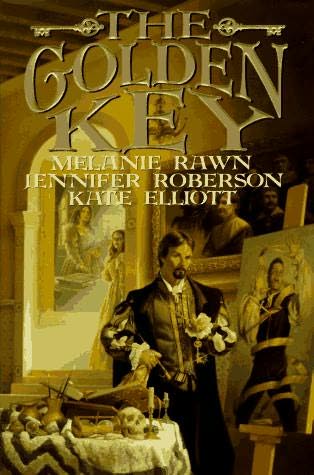 The Golden Key is a 1996 fantasy novel written by three women: Jennifer Roberson, who penned the story's first act; Melanie Rawn, author of the book's second section, and Kate Elliott, who finished the work.

Set in what might loosely be described as an alternative Spain, the novel traces a family of painters who, by nature of their Gifts, can influence events around them. In the Grijalva family, the Gifted males are usually sterile and short-lived; the women, who may be gifted for painting, but not Gifted for the particular type of painting that alters what it portrays, are generally kept within the family to produce children. However, one woman per generation is official mistress to the ruling Duke, so that the family maintains its influence at Court. The story develops when a particularly Gifted and unscrupulous Grijalva painter named Sario finds a way to continue living through successive generations in order to paint a picture worthy of his immense talent. As the political and social climate changes, including revolutions in neighboring countries and democratic challenges to the ruling Dukes, the increasingly conservative Sario seeks to hold onto the past, and especially his first love.

Throughout the book, special emphasis is placed on iconography and a set of possibly Arabic/Moorish spells that bend events to the will of the painter. The connection between the ruling Dukes and the Grijalva family is shown to be more far-reaching and subtle than at first appears. The development in painting styles is used as a metaphor for political changes that mirror western European history, especially in France and Italy from 1500 to (say) 1820. The succession of paintings in the ducal gallery (which turns into the national gallery) is the lens through which we see the historical and personal events that make up this fantasy history.