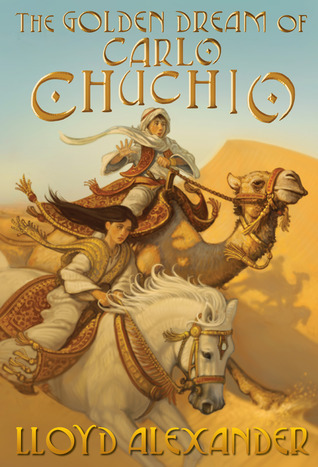 This is a book by Lloyd Alexander, author of The Chronicles of Prydain. Carlo, a good-for-nothing apprentice to his uncle, a merchant in an obviously medieval Italy-like city-state, finds a map in a mysterious book found in the city's Bazaar of the Bizarre. Deciding he does not want to be a merchant, he goes off in search of treasure. On the way he meets Shira, an innkeeper's daughter who is a runaway slave; Baksheesh, a lazy beggar turned caravaner, and Saloman, a mysterious old man who is Walking the Earth. The book follows their adventures along their journey in a mysterious land that is like the medieval Silk Road. Few things big happen along the journey; it is mostly a simple adventure tale. But it is done with imagination and love, and gives an insight into what Medieval travellers must have felt like.

The Golden Tropes of Carlo Chuchio: