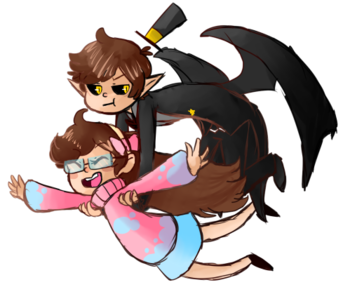 The Transcendence AU is a Fan Verse of Gravity Falls, in which a plot by Bill Cipher to unite the dream realm and the physical realm was foiled by Dipper and Mabel. The end of the world was prevented but the two worlds crossed over slightly, breaking the barriers around Gravity Falls and unleashing the weirdness on the rest of the world. Bill, severely weakened, sought refuge by possessing Dipper - a plan that backfired spectacularly when his demonic energy became fused to Dipper instead, killing Bill and causing Dipper to transform into a demon. Dipper retained his human form, but since he existed only in the mindscape, only Mabel could see him at first. He holds a greater affinity for the material plane and is less affected by normal demonic constraints due to his human origins, resulting in him becoming an incredibly powerful entity in a relatively short period of time.

This verse tends to deal with the aftermath of these events, known as the Transcendence, particularly years or decades into the future, and a large portion of the fanworks are considered canon within the AU or could easily fit into it.

is the current community, where fic, art, discussion, and the general evolution of canon can be found, as well as an askbox for the blog moderators and creators of most of the AU. All Transcendence AU fics on Archive of Our Own can be found here

The official in-character ask blog can be found at tau-cast.tumblr.com

This page is under continual construction - due to the sheer volume of content produced, it is impossible to catch it all. If you know of fics that are not on the page, please add them (especially those not reblogged by the main blog as they may be missed entirely).

The Stories in the AU

open/close all folders
Main Stories
These links should be to stories considered canon within the AU community. Please organize in chronological order.

Meeting With The Dean

Hank and His Supernatural Mafia

Justin is the cutest dork

Side Stories
These links should be to stories written within the AU that can fit in with the AU canon, but are neither part of the official canon or fit anywhere in particular on the timeline. Please attempt some kind of chronological order.

In Which Dipper's Fan Club Takes Things Way Too Far

A Cult of Dipping Sauce

Of Family and Normalcy

Thank You for Flying “Alcor Airlines”

Stars in Their Own Rights

The Cult of Dipping Sauce

Sleeping on the Job

One Day At Alcorcon (Part 1)

The Quest for Blood Valley

I Won't Make You Fake ID's

Twin Souls
These links are to all the Trashy Romance Novel excerpts - in-universe fanfiction featuring Dipper/Alcor or related characters.

In the Arms of the Demon King

Summons and Submissives: aka Mabel regrets nothing and Dipper is so done

Any Way You Want It

Retellings of Canon Events
These links are to stories that have been confirmed to be part of the canon timeline, but have multiple versions. There may be a specific one of these that is considered canon, or all of them may be equally unconfirmed.

Non-Canon Offshoots
These links should be to stories that do not fit in with the AU canon - if they just don't have a spot on the timeline, they go in Side Stories, if they clash or are said to be non-canon by mods, they go here.

Recognized offshoot AUs
Links to stories taking place in one of the A Us recognized by the Transcendence AU mods: Friends with Tax Benefits (where Mabel dies and Dipper friend-marries her husband Henry), Drift AU (where Dipper is invisible even to Mabel), and Integration AU (Dipper is visible and tangible to everyone from the start). Equivalence AU and Avarice AU fics do not belong.

by iguessso (Link to Part 1)

Other AUs
Links to stories which take place in variations of the Transcendence AU, such as the Equivalence AU

(where Mabel becomes a demon instead of Dipper), Twin Starlets AU

, (Instead of becoming a demon, Dipper becomes a "link" between the Mindscape and the physical world).

The fanverse community provides examples of: