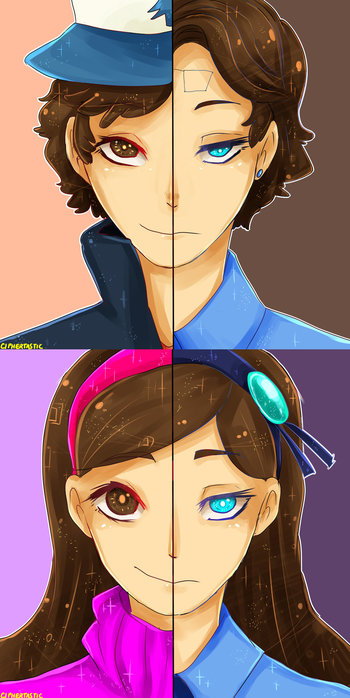 Reverse Falls (also known as Reverse Pines or Reverse Gravity Falls) is a Fan Verse of the popular cartoon Gravity Falls. It originated on the multimedia blogging platform Tumblr in 2012, but has since spread to other online communities such as Pixiv and Archive of Our Own.

Reverse Falls follows the formula of a traditional Mirror Universe, in which the personality traits of all the main characters are flipped. Most notably, Dipper and Mabel Gleeful are Half Identical Twin psychics who run the Tent of Telepathy, using their magical abilities to terrorize the town, conduct evil research, and hold magic shows. They also succeed in enslaving meek dream demon Will Cipher to do their bidding. Meanwhile, Pacifica Southeast, a young hippie, and Gideon Pines, an outsider, form the intrepid mystery duo. Some creators go one step further, depicting Wendy and Robbie switching personalities, Stan as an evil magician, and so on.

As a Fan Verse, anyone in the community can contribute their own stories to the AU. Aside from the vague mirror aspect of the characters, the story and setting of the universe is wholly open to interpretation.

This AU in general provides examples of: