Video Game / X: Beyond the Frontier 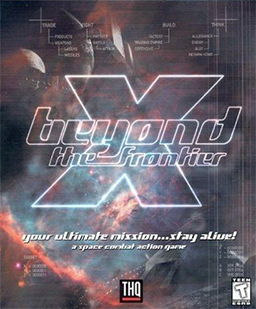 The first game in the X-Universe series, X: Beyond the Frontier, or X:BTF among series veterans, hearkened back to the granddaddy of the Wide-Open Sandbox, the Elite series. It was developed by the then-virtually unknown German studio Egosoft and published by THQ in the United States and SouthPeak Interactive in Europe.

The game places you in the role of Major Kyle William Brennan of the Terran United Space Command, currently posted as the test pilot of the USC X (later called the Xperimental Shuttle), a combat-capable prototype equipped with an experimental jumpdrive. During the test jump, something goes drastically wrong and Brennan ends up in an unknown part of space. He encounters an alien race, the Teladi, a highly capitalist profit-focused culture. Finding Brennan helpless, they repair his ship and loan him some money. They also give hints on trading in the X-Universe, and may tell him (if he asks) about the Argon and other alien races in the X-Universe, a network of sectors linked by jumpgates. With his jumpdrive destroyed, and no idea how to return to Earth, Brennan finds himself stranded, alone and indebted to an alien race. The player is free to choose how to continue the game, and if or when to pursue the main plot.

The game was criticized for its Nintendo Hardness but nevertheless garnered a niche following that has persisted to this day (though the X3 trilogy is more widely played). It was re-released on Steam in October 2010 after being carefully updated to run natively on Windows XP.

It received an Expansion Pack, X-Tension, in 2000 that allowed the player to fly virtually any ship in the game rather than just the X-Shuttle, and followed Brennan as he set up a trade and engineering company that would eventually become the later games' TerraCorp. It was also made into a book, Farnham's Legend by Helge T. Kautz, which was nominated for the Kurd-Laßwitz-Preis (the German equivalent to the Nebula Award) in 2001.

Please put tropes not specific to X:BTF on the main X-Universe pages.

X: Beyond the Frontier provides examples of the following tropes: