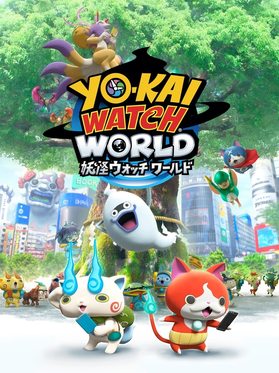 Yo-kai Watch World is an Augmented Reality Yo-Kai Watch adventure game developed by Level-5 and Gung-Ho Online Entertainment. It was announced and released on iOS and Android mobile devices on June 27, 2018 in Japan.
Advertisement:

In Yo-kai Watch World the player goes to real world locations and finds yo-kai to battle and befriend. Players can encounter different events whilst roaming. On top of featuring yo-kai from previous games, Yo-kai Watch World features a variety of new yo-kai such as Surfernyan and and Bullet Train Usapyon.

There are no current plans for localizations of the game.