This is the character page for the Ys franchise. For individual pages on specific installments, see the following:

WARNING: SOME SPOILERS ARE UNMARKED. 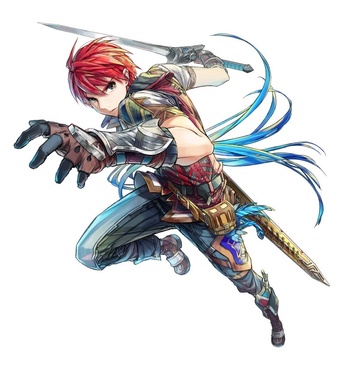 The protagonist of the franchise, Adol Christin is a wandering swordsman who appears in the majority of the games. A very capable swordsman and an adventurer, Adol's legacy is detailed in the world's history centuries after his adventures ceased, collected in re-printed volumes of his journals.

Introduced as a thief who breaks Adol out of prison near the climax of Ys by destroying a wall, Dogi becomes Adol's traveling companion for the majority of the franchise. 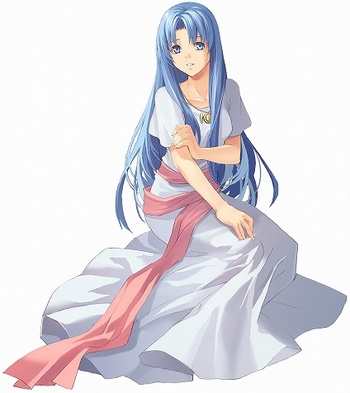 Introduced as a mysterious, amnesiac, blue-haired girl locked away underneath a shrine in Esteria, Adol comes to Feena's rescue in Ys I. She turns out to be a key character in Ys I and Ys II, the younger of the twin goddesses who once governed over the franchise's eponymous mythic kingdom. 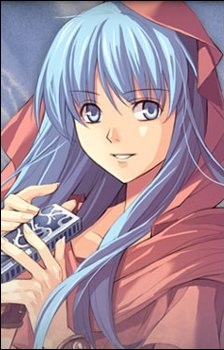 A cloaked, blue-haired poet from the town of Minea in Esteria, Reah tasks Adol with finding her lost silver-colored harmonica in Ys I. Just like Feena, Reah is another Eldeen, the elder of the twin goddesses of the ancient Kingdom of Ys.

The Clan of Darkness

Also know as the "Darklings", the members of the Clan of Darkness are recurring antagonists through the series.

Members of the Clan of Darkness appearing in Ys I&II and in the Prequel Ys Origin are listed bellow. Characters introduced in other games are listed in their respective character pages. 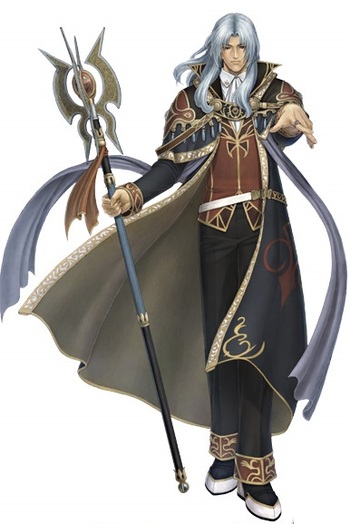 The second-highest villain in the second game and one of the main antagonists in Origin, actually a dark mage who answers to Darm, and leading the series of killing off the Six Priests' descendants.

His looks have varied depending on the version (TG-16 version has him looking outright evil under his hood, some versions of Eternal are just red eyes in shadow, the OVAs have him look like a short, bald guy and Chronicles has what he looks like from Origin under a hood). 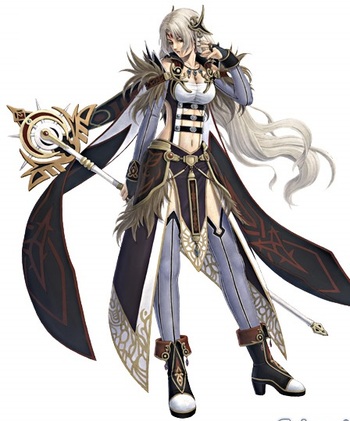 Zava in Ys Origin
A Vain Sorceress from the Clan of Darkness working for Dalles. 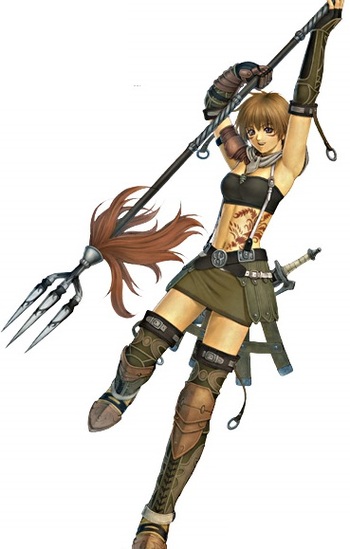 A Darkling who serves Dalles in his scheme to claim the Black Pearl. 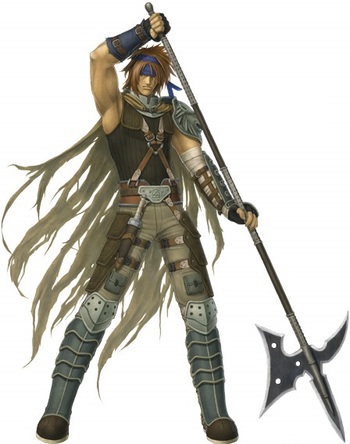 Head of the thieves in Esteria. Despite the claims that his group was stealing all the silver around the island, it wasn't: Dark Fact was the thief. Some time before Adol's arrival to Esteria, he led an ill-fated assault on Darm Tower, which lead to the group's pulling back but losing Dogi in the process. He comes back in the second game at the last minute and also re-appears in The Dawn of Ys. He has an older relative in one of the towns, and a sister that is a fortune teller her fate is ambiguous in the TG-16 version and re-arrives in the non-canonical Dawn of Ys, dies in every other version.

A kind-hearted girl who finds Adol lying in the field after he's catapulted through the sky at the beginning of Ys II. She is also tragically unaware that she has a terrible illness that will kill her any day. After Adol repays his debt by finding the cure, Lilia develops a hilariously overbearing crush that's powerful enough to bleed into the later games.

A sleepwalker who happened to be in Darm Tower. Helps Adol out by giving him family heirlooms that help traversing the higher levels of the tower. Despite having an injury, he survives the first two games.

A humanoid demon who is responsible for stealing silver items from the residents of Esteria. He seeks to collect the Books of Ys for his own nefarious ends.

A shopkeeper from Xandria and Stein's adopted daughter. Two years ago, Stein and others found her at the desert of Felte. She does not recall what happened to her before she got lost in the desert.

A guard-captain and partner of Dorman. She's actually a royalty from the sealed city of Kefin. When the seal on Kefin got weakened, she escaped along with some of her soldiers and manipulated Dorman into hiring adventurers in order to break the seal on Kefin completely.

A servant of Rizze from Kefin.

A wealthy merchant from Xandria who hires Adol to look for the mystical alchemy from the lost city of Kefin, claiming that such power can be used to stop the desertification of Xandria. In reality, he is trying to harness the power of alchemy for himself. However, it turns out that he is manipulated by his partner-in-scheme Rizze, who has other ideas in mind.

Stoker's fiance. In order to prevent Kefin's soldiers from taking the light crystal, she sealed herself along with the crystal. Stoker has been watching over her ever since.

A spirit from 500 years in the past, Stoker might seem sinister, but there's more to him than it initially seems. He longs deeply for his fiancee, Foresta.

A local alchemist who lives in the cabin near the village of Foresta. She helps Adol in his quest by using elemental stones to create alchemy spells for him to use.

Niena's adoptive father and a veteran adventurer who has gone missing while looking for the lost city of Kefin. It turns out he did manage to get into Kefin and decided to become the leader of La Résistance against its oppressive regime.

A scurrilous little scamp from a group of outlaws in the forest, she first tries to scam Adol by pretending she's a maiden in distress. She and her family continuously cause mischief for Adol throughout the game but become allies later on.

An alchemist who found the philosopher's stone in the jungle of Xandria 500 years ago. With its unimaginable power, he became immortal and took control of Kefin from the shadows. He then sought to conquer the rest of the world but other alchemists, led by Foresta, stopped him by sealing Jabir and the entire city of Kefin in another dimension. Since then he has been seeking to break the seal while maintaining the power of the philosopher's stone through human sacrifices.

The grand-daughter of one of the six priests of Ys, she is part of a search party to discover what happened to the goddesses. Her main weapon is an axe. 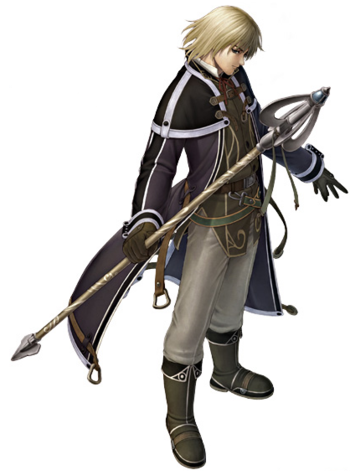 The ancestor of the evil Dark Fact, Hugo is a powerful magician with projectile based spells. He controls two floating orbs known as the Eyes of Fact that effectively triple or quintuple his firepower depending on whether or not he is in boost mode or not. He also has a variety of shields at his control. 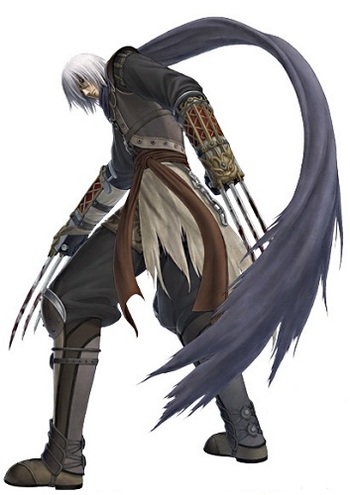 The leader of the Six Priests who govern the mythical kingdom of Ys along with the twin goddesses. When the goddesses go missing, he sends down the search party to the surface to look for them. He is secretly responsible for every calamity that befell in Ys. In order to gain the power of the black pearl for himself, he allowed the Clan of Darkness and demons to invade Ys, causing the continent of Ys to float. At the end of Toal's route, he shows up and finishes Dalles off, revealing his true colors in the process. He then proceeds to fuse with the black pearl and become the demon king Darm. Nonetheless, he is defeated by his son Toal and gets sealed by the twin goddesses. The seal gets broken again 700 years later, but this time, he is defeated for good by Adol.

The head priest of Solomon Shrine, who leads the search party in finding the goddesses in Darm Tower.

The acting Commander of the Holy Knights and an old friend of Toal's.