Characters / Ys: The Oath in Felghana

This is the character list for Ys III: Wanderers of Ys and its Video Game Remake, Ys: The Oath in Felghana. For Adol Christin, Dogi and characters from other installments, see the main page.

Some spoilers are unmarked.

A blond kind-hearted girl from the village of Redmont who gets saved by Adol at the beginning of the third game, she is a childhood friend of Dogi. She is worried about her brother Chester, who has gone missing for past few months. 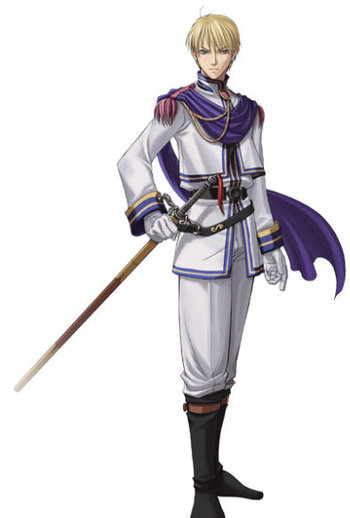 Elena's brother and Dogi's friend who has gone missing for past few months. He later shows up and reveals that he has become the Count McGuire's knight in order to make a name for himself. He quickly becomes a menace to Adol as he is also looking for statues that house the power of the ancient demon Galbalan by the order of his master. It turns out that he is actually trying to get revenge on the Count McGuire for destroying his hometown. While his plan for the revenge is successful, he does not realize that he has been used as a pawn by the real mastermind - Bishop Nikolas - for the complete revival of Galbalan.

A legendary ex-mercenary who lives in a cabin in Elderm Mountains, where he secludes himself from society while researching the secrets of Genos.

Head of the Felghana diocese. Once served at Redmont's church, but now focuses his efforts on trying to keep relations between the count and the townsfolk as smooth as possible.In reality, he is the mastermind behind Chester's Roaring Rampage of Revenge and the Count McGuire's more vicious actions. After making contact with Galbalan at the Illburns Ruins some point before the game, he became convinced that Galbalan is the true god and did everything in his power to bring Galbalan's revival to completion. After revealing his true colors and his real name of Nikolas Garland near the end of the game, he kidnaps Elena in order to use her as a final sacrifice to Galbalan. The dark bishop is ultimately defeated by Adol, who proceeded to destroy his "god" Galbalan as well.

The feudal lord of Valestein Castle, and a materialistic nobleman from the Romun Empire. Levied heavy taxes on the people of Redmont for many years, and is regarded as a despot. In the game proper, he seems to be looking for the statues that house the power of the ancient demon Galbalan...

A Evil Sorceror who stalks Adol during his travels in Felghana.

An ancient demon from the legend. Supposedly, it was slain by the warrior Genos with the blessing of the winged ones. However, it turns out that even Genos could not defeat the beast completely so he divided its powers into the four statues and sealed each statue at different regions across Felghana. Somehow, it managed to get in contact with the bishop Nikolas at Illburns ruin, turning the once devout priest into the fanatical madman who would stop at nothing to revive his true god. Through Nikolas, Galbalan was able to destroy most of the descendants of Genos and regain his powers. After receiving Elena's energy, Galbalan starts to awaken and declares his intention to destroy everything and spread terror across the world. Fortunately, Adol manages to arrive just in time to face the would-be destroyer. Although Adol manages to critically weaken the monster, it starts to regenerate rapidly. Ultimately, Chester, in his moment of redemption, sacrifices himself to blow up the whole island, destroying the demon for good in the process.

It is implied that Galbalan is an artificial creation from Ash Emelas that was created by the Clan of Darkness long time ago as a weapon of mass destruction. It somehow managed to gain sentience and went on a rampage before getting sealed in Felghana by Genos.

There are other Galbalans in other games like Memories of Celceta and The Ark of Napishtim.