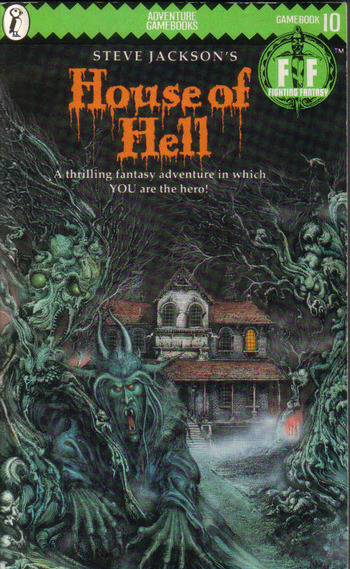 Something tells me this house is not very friendly.
Advertisement:

House of Hell is the tenth entry in the Fighting Fantasy line of Gamebooks, and notable for taking a departure from the usual formula by not only setting it on Modern-Day Earth, but having you, the protagonist, as an ordinary everyman/everywoman, and shifting the genre from Heroic Adventure to Gothic Survival Horror. Written by Steve Jackson, co-founder of Fighting Fantasy with Ian Livingstone.

It Was a Dark and Stormy Night, and in spite of the pounding rain protesting on your windshield, you simply must make that important appointment tomorrow morning. Maybe you should have spent the night at that diner, where a strange old hobo with long white-and-dishevelled hair warned you to not proceed through this very night.

But too late for that, as your car just had to break down in the middle of nowhere as the storm became torrential, with not a telephone in sight.

Your frustration at losing your job tomorrow turns to hope as you spot an old and decrepit Victorian Mansion on a distant hill. Eureka! Now you can call the insurance company, have your car fixed, and make that appointment after all! But in your enthusiasm you fail to notice that not only are there no electrical lights in the windows, but no telephone line runs to this sinister mansion...

Tonight will be a night to remember.

See also Blood of the Zombies, written by Ian Livingstone.

House of Hell provides examples of: