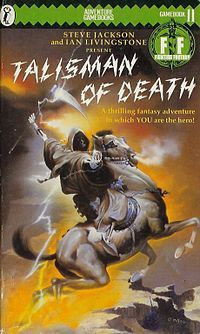 Talisman of Death is the eleventh entry in the Fighting Fantasy series of Gamebooks, written by Jamie Thomson and Mark Smith.

Set in the world of Orb, you have been chosen as the Champion of Fate by the deities of this world, for a great struggle is ahead: the minions of the Fleshless King, servant of Death, have fashioned a powerful Talisman, which will allow them to summon their God on earth and deprive Orb of all its life. In order to stop them, you must recover the Talisman, find a way to open a portal to your own wold, Earth, and return there: in that dimension, the Talisman will be safe and beyond the boney grip of the Fleshless King. Armed with a steel sword and the help of the Gods of Orb, you must venture forth in your quest.

As you can see from the preview, Talisman of Death isn't set in Titan, but in the dimension of Orb, the same world of Way of the Tiger, so much that we could call it a crossover. It follows the same rules as the other gamebooks of the series, but is also different in the low number of game overs: as the Gods are with you, certain endings that could be considered game overs instead hit a Reset Button which allows you to restart an area from the beginning. Be careful, though, as it won't always work...

Talisman of Death provides examples of: